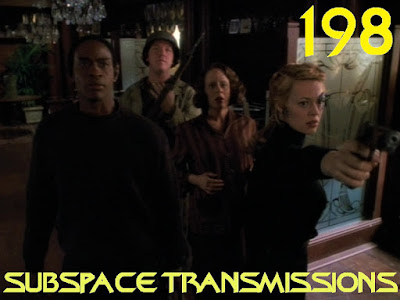 While probably not one of TOS's best hours, season 2's Patterns of Force is unforgettable for its contrasting of Roddenberry's colorful utopia against grim WWII Nazi imagery. Iconic visuals aside, however, there was plenty of room for improvement in 1998 when Voyager took a second shot at exploiting these clashing aesthetics with The Killing Game, the two-part Hirogen saga wherein Janeway and company find themselves trapped in a simulated Germany-occupied France. But was this revisit to familiar ground effective? This week hosts Cam Smith and Tyler Orton, along with special guest Tony G. of the Arniegeddon podcast, sign up for the resistance while reviewing arguably the most ambitious holodeck adventure of all time! Undeniably popular with fans, does this feature-length season 4 entry work as both a thrilling adventure and a satisfying Star Trek tale? And do these episodes invite even more holodeck logic nit-picking than usual? Hop on your metaphorical bicycle and join the trio for a lively debate-fueled ride from war-torn Saint Clair to Klingon camping grounds and beyond!

Join us next week as we experience pon farr!
Posted by Subspace Transmissions at 12:25 AM