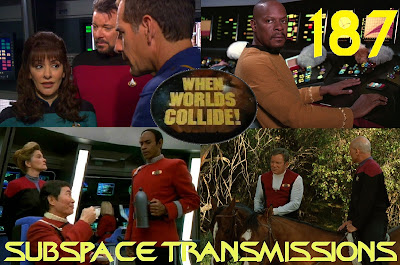 Who can ever forget when the Flintstones met the Jetsons? Or Batman & Robin teamed up with the Green Hornet & Kato? Since nearly the beginning of the TV era crossovers have been a proven means of boosting ratings and injecting energy into a series. And Star Trek has definitely gone to this particular well more than a few times. This week hosts Cam Smith and Tyler Orton take a reflective look at the many times the people in charge of the franchise have attempted to grab eyeballs and generate fan excitement by mashing up their titanic properties. From the Enterprise-D swinging by Deep Space 9, to Sisko's Tribble troubles and Tuvok and Janeway's mind meld tour of Captain Sulu's Excelsior, the duo debate how successfully these attention-grabbing stunts have held up beyond their initial hype. Also, as an added bonus, Cam reviews IDW's new Stamets-centric Discovery double-sized annual.

Join us next week as we delve into Trek's darkest hours...
Posted by Subspace Transmissions at 2:28 PM