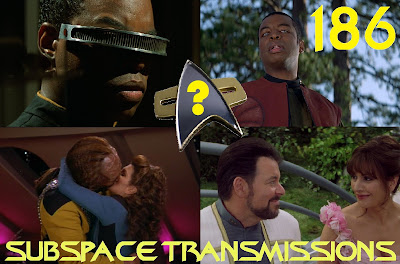 Remember at the end of All Good Things... how Troi and Worf appeared ready to embark on a potential long-term romance? Boy, that sure paid off! But then, the TNG crew experienced so much off-screen change and growth in the eight years between the finale and Nemesis... In an attempt to settle their restless continuity-obsessed minds, this week hosts Cam Smith and Tyler Orton form a two-man writers room to decide which unanswered questions most demand answers in a hypothetical reboot bridging the crucial post-series/mid-film time gaps. For example, what were the deciding factors behind Geordi's switch to ocular implants in First Contact? How did the crew occupy themselves while the Enterprise-E was under construction? And what were the circumstances surrounding Wesley's return to Starfleet and Guinan's exit post-Generations? If you've ever spent time pondering the staffing issues caused by Worf's sporadic movie-required reappearances on the bridge this is the episode for you!

Related Podcast Episodes:
For the Love of Wesley!
TNG at 30: The Greatest Trek?

Join us next week as we explore the franchise's best and worst crossovers.
Posted by Subspace Transmissions at 12:52 AM