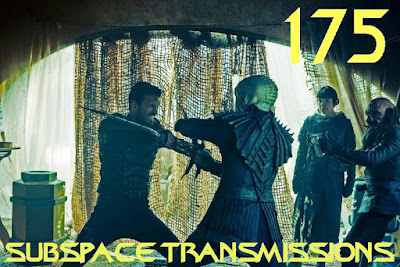 After the crowd-pleasing highs of Despite Yourself last week (Captain Killy ftw!), we're about due for some downtime in the Mirror Universe, right? Not so fast! This week hosts Cam Smith and Tyler Orton, along with special guest Janine Smith, pledge allegiance to the glorious Emperor and grapple with the latest epic shakeup in the Discovery universe! For not only does the show's latest thrilling hour offer up new takes on the Andorians and the Tellarites, it also at last pays off the mystery surrounding frequently conflicted security officer Ash Tyler. In addition to discussing the ramifications of these major happenings, the trio also ponder the future of poor Stamets, the vagaries of L'Rell's plan and the comic possibilities of DSC's cumbersome new Klingon accent.

Wanna appear on the show? Shoot us a 30 to 60-second audio clip telling us your thoughts regarding THE WOLF INSIDE and you could take the spotlight in an upcoming program! You can also send any other questions, topic ideas or feedback to subspacetransmissionspod@gmail.com!

Related Podcast Episodes:
All About the Andorians!
Talkin' About Tellarites!
Should Trek Return to the Mirror Universe?

Join us next week as we delve into Discovery's 12th episode, Vaulting Ambition!
Posted by Subspace Transmissions at 12:15 AM