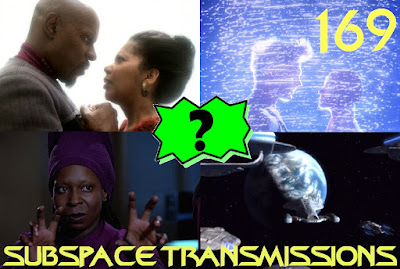 Since Star Trek's inception, hardcore fans have been mulling over and passionately debating its unanswered questions. Who built the Great Barrier, for example? This week hosts Cam Smith and Tyler Orton don their problem-solving hats in order to conquer some of the franchise's outstanding unresolved mysteries once and for all! From popular queries, such as Guinan's origins and Benjamin Sisko's return, to more obscure head-scratchers, like the fate of human doctors in an EMH world and ENT's proposed fifth season Romulan War arc, the duo do their darndest to help alleviate the frustration surrounding Trek's most maddening abandoned plot threads and ambiguous endings.

Wanna appear on the show? Shoot us a 30 to 60-second audio clip telling us your thoughts regarding STAR TREK'S UNSOLVED MYSTERIES and you could take the spotlight in an upcoming program! You can also send any other questions, topic ideas or feedback to subspacetransmissionspod@gmail.com!

Join us next week as we chart the evolutionary path of the Klingons!
Posted by Subspace Transmissions at 3:00 PM