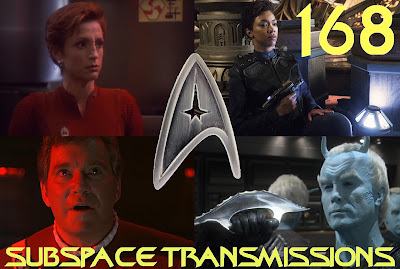 With Discovery on mid-season hiatus it's back to business as usual! And, with Burnham's killer Kol takedown still fresh in mind, it seems like a perfect time to examine the Trek characters who most personify badassery. This week hosts Cam Smith and Tyler Orton embark on a critical expedition through the history of the franchise in search of figures who capture the same sort of magical 'je ne sais quoi' many of film and TV's coolest icons boast in spades. From the double hammer-fisted exploits of Kirk, to the formidable Major Kira and the inconsistently written Janeway and Worf, many candidates are considered but only a handful earn their place in the pantheon. Tune in and find out who makes the oh-so exclusive cut!

Wanna appear on the show? Shoot us a 30 to 60-second audio clip telling us your thoughts regarding STAR TREK'S MOST BADASS CHARACTERS and you could take the spotlight in an upcoming program! You can also send any other questions, topic ideas or feedback to subspacetransmissionspod@gmail.com!

Join us next week as we ponder Trek's most lingering questions...
Posted by Subspace Transmissions at 3:55 PM