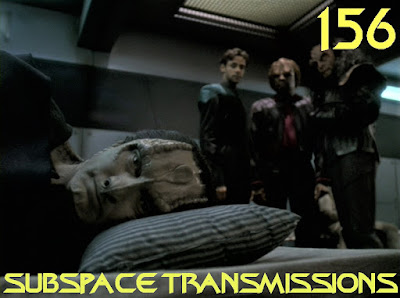 It's thuddingly obvious at this point in Deep Space 9's run the question isn't really whether a two-parter is good or not so much as just how mind-meltingly awesome it is! And how could you ever go wrong with a space jail epic starring everybody's favorite Cardassian man of mystery Garak?! This week hosts Cam Smith and Tyler Orton, along with returning guest Patrick Johnson, lock themselves up with the show's fifth season Great Escape homage In Purgatory's Shadow & By Inferno's Light and relive Martok's return, Worf's warrior badassery and the legendary Bashir bombshell. An inarguably ambitious episode in concept, but does it work as both a satisfying standalone adventure as well as another escalating chapter in the broader Dominion war tapestry? Join the trio for their memorable return trip to Internment Camp 371 and find out!

Wanna appear on the show? Shoot us a 30 to 60-second audio clip telling us your thoughts on IN PURGATORY'S SHADOW & BY INFERNO'S LIGHT and you could take the spotlight in an upcoming program! You can also send any other questions, topic ideas or feedback to subspacetransmissionspod@gmail.com!

DS9: The Way of the Warrior
DS9: Homefront & Paradise Lost

Join us next week as we pay tribute to DS9's groundbreaking Dominion invasion arc on its 20th anniversary!
Posted by Subspace Transmissions at 8:19 PM