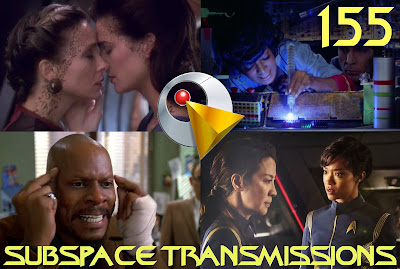 Over the course of its 50-plus years Star Trek has been crucial in lifting fans' optimism during rough and depressing periods of social strife, war and seemingly stalled advancement. After all, Roddenberry's utopia promises there are rewards waiting for us on the other side. But has the show always fought to honor its pledge to showcase progressive values in primetime? This week hosts Cam Smith and Tyler Orton reflect on the franchise's most important breakthrough moments of showcasing and celebrating diversity, and debate how successful the various series have been at striving to reflect the realities of our time. From Nichelle Nichols' invaluable contributions as Uhura, to key episodes like Far Beyond the Stars, Rejoined and The Outcast, the duo cover the many highs (and some of the unfortunate lows) in an attempt to determine whether Trek's enlightened, forward-thinking reputation is still deserved and how Discovery can further the evolution.

Wanna appear on the show? Shoot us a 30 to 60-second audio clip telling us your thoughts regarding STAR TREK'S BIGGEST BREAKTHROUGHS and you could take the spotlight in an upcoming program! You can also send any other questions, topic ideas or feedback to subspacetransmissionspod@gmail.com!

Join us next week as we revisit the DS9 season five two-parter In Purgatory's Shadow & By Inferno's Light!
Posted by Subspace Transmissions at 9:44 PM