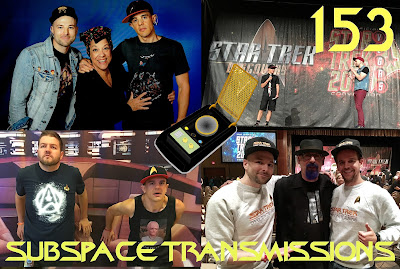 Last year may have been the big 50th anniversary hoopla, but Creation Entertainment still had some tricks up their sleeve for this year's hordes of Las Vegas con attendees! After all, with Discovery waiting in the wings, and TNG turning 30 there was plenty of excitement to be had! Recorded immediately after the 5-day event's final panel, this week's episode sees sleep-deprived hosts Cam Smith and Tyler Orton, along with returning special guests Scott Hardy and James Chesser, recounting their own convention highlights. From CBS's Discovery showcases, to the Enterprise-D crew's anniversary bows and memorable appearances by William Shatner, Ira Steven Behr and Dr. Mae Jemison, the weary foursome fill you in on all the crucial happenings that transpired during Trekdom's legendary annual tradition.

Wanna appear on the show? Shoot us a 30 to 60-second audio clip telling us your favorite STAR TREK LAS VEGAS CON 2017 MOMENTS and you could take the spotlight in an upcoming program! You can also send any other questions, topic ideas or feedback to subspacetransmissionspod@gmail.com! 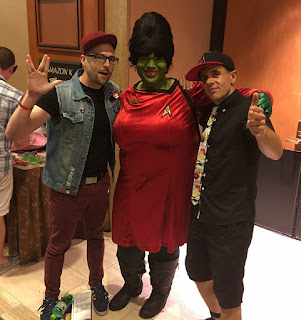 Join us next week as we induct more iconic moments into our official canon!
Posted by Subspace Transmissions at 10:05 PM