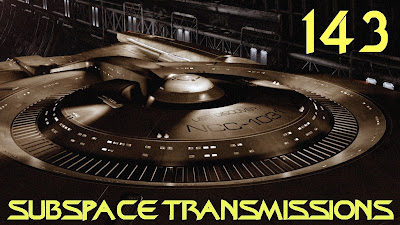 Now that the fanfare surrounding the big 50th anniversary year has faded, does the franchise still appear to be in promising shape? This week hosts Cam Smith and Tyler Orton once again hold their annual forum to take Trek's temperature and gauge how healthy the not-so-distant future looks to be. Among the crucial bullet-points discussed are the polarizing new Star Trek Discovery teaser trailer, Seth MacFarlane's impending TNG spoof The Orville, and the seemingly uncertain fourth Kelvin-verse film entry. While there's no shortage of life left in our beloved sci-fi series, listen in and find out whether the duo choose to embrace pessimism or Roddenberry-ish optimism.

Wanna appear on the show? Shoot us a 30 to 60-second audio clip telling us your thoughts regarding THE CURRENT STATE OF STAR TREK and you could take the spotlight in an upcoming program! You can also send any other questions, topic ideas or feedback tosubspacetransmissionspod@gmail.com!


Join us next week as we revisit the DS9 two-parter Homefront/Paradise Lost.
Posted by Subspace Transmissions at 4:03 PM