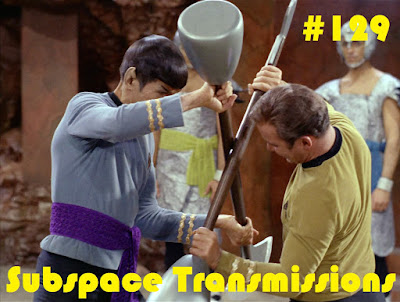 Star Trek is an undeniably sophisticated and intellectually curious franchise rife with rich themes, layered concepts and fascinatingly multi-dimensional characters worth having thoughtful discussions about. That said, sometimes it's more fun to just drop all pretenses and have really goofy and nerdy debates. Such is the case this week as hosts Cam Smith and Tyler Orton, along with returning guest Tom Ball, don their hypothetical hats and argue over who would emerge victorious from a franchise battle royale. Would it be proud warrior Worf, unassumingly formidable Vulcans Spock, Tuvok or T'Pol, or perhaps a feisty wildcard like Kira or Kirk? Listen in as the trio ring the bell and talk their way through multiple rounds of astonishing matchups on their way to a show-stopping climactic bout.

Wanna appear on the show? Shoot us a 30 to 60-second audio clip telling us who you think is  THE ULTIMATE STAR TREK FIGHTER  and you could take the spotlight in an upcoming program! You can also send any other questions, topic ideas or feedback to subspacetransmissionspod@gmail.com!

Join us next week as we fly into the Delta Quadrant for the very first time.
Posted by Subspace Transmissions at 4:10 PM