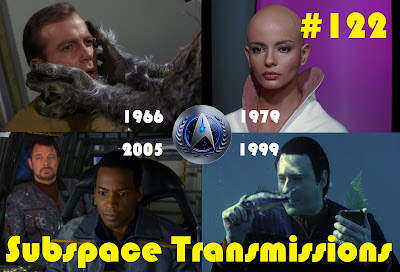 With the decidely strange era that was 2016 behind us, what better way to usher in 2017 than by celebrating - and occasionally shuddering at - the Star Trek history that led up to it. This week hosts Cam Smith and Tyler Orton dig through their dusty franchise almanacs in order to properly decide which years were the most momentous for fans, and which ones were just plain 'ol bummers. From the birth of TOS in 1966, to the uncertain 1970s, explosive 1990s and mostly barren early 21st century, the duo consider ever crucial event and setback in order to succeed in their particularly daunting mission.

Wanna appear on the show? Shoot us a 30 to 60-second audio clip telling us your thoughts on STAR TREK'S BEST AND WORST YEARS and you could take the spotlight in an upcoming program! You can also send any other questions, topic ideas or feedback to subspacetransmissionspod@gmail.com!

Join us next week as we determine which alien species to revisit in Star Trek Discovery!
Posted by Subspace Transmissions at 11:20 PM