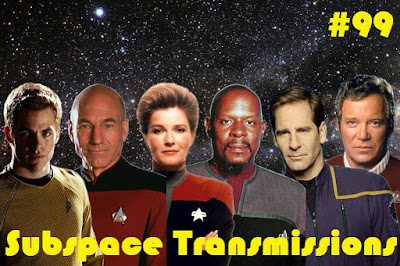 Ever since TNG premiered in the late 1980s fans have debated until they're blue in the face which captain reigns supreme. Throw in four more contenders over the next couple decades and the argument gets downright chaotic. This week hosts Cam Smith and Tyler Orton, along with special guest Vicki Siu, wade into the fray to reveal how each of the six stack up against their distinguished competition. Will they favor the wise and experienced Picard, or Shatner's brash and bold Kirk? And what about relative newcomers Archer and Chris Pine's Kirk? Listen in for what will certainly prove to be a controversial hour of podcasting nerdvana!

Wanna appear on the show? Shoot us a 30 to 60-second audio clip telling us your STAR TREK CAPTAIN RANKINGS and you could take the spotlight in an upcoming program! You can also send any other questions, topic ideas or feedback to subspacetransmissionspod@gmail.com!

Join us next week as we revisit All Good Things...!
Posted by Subspace Transmissions at 8:12 PM