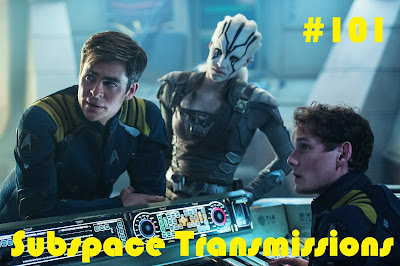 After countless months of obsessive speculation, and an equal mix of excitement and concern, Star Trek Beyond is now playing in a theatre near you. But does it deliver? This week hosts Cam Smith and Tyler Orton take a spoilery deep dive into the third Kelvin-verse entry and offer up their own thoughts on how it stacks up against the two past J.J. Abrams installments, and - as always - break down what works and what unfortunately doesn't. As well, the duo add the film to their own personal franchise movie rankings and ponder how the recently announced fourth chapter will shape up post-Justin Lin. So listen in and enjoy as Subspace digs into the Krall of it all.

Wanna appear on the show? Shoot us a 30 to 60-second audio clip telling us your thoughts on STAR TREK BEYOND and you could take the spotlight in an upcoming program! You can also send any other questions, topic ideas or feedback to subspacetransmissionspod@gmail.com!

Join us next week as we celebrate Trek's mightiest showrunners!!!
Posted by Subspace Transmissions at 10:04 PM