#87 - SHOULD TREK RETURN TO THE MIRROR UNIVERSE? 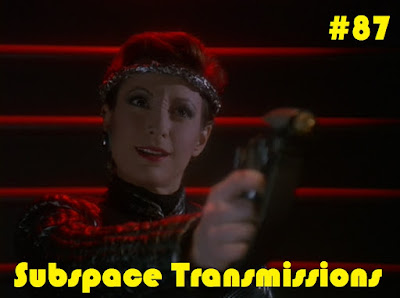 Despite modest beginnings as a one-shot novelty bottle episode, Trek's Mirror Universe has grown into a rich and beloved element of the franchise, greatly expanded in spin-off novels, comics and fan films. But is there still more left to explore in the future? This week hosts Cam Smith and Tyler Orton don fake beards and debate how much gas is left in this parallel universe's story tank after being prominently featured in over a half dozen hours of television of wildly varying quality. Critically analyzing past efforts, from TOS to Enterprise, the duo assess the likelihood of future serialized shows and nu-Trek films venturing into this broadly campy dystopian cesspool of brutality, scheming, double-crosses and hyper-sexuality. Enjoy!

Wanna appear on the show? Shoot us a 30 to 60-second audio clip telling whether or not you think STAR TREK SHOULD RETURN TO THE MIRROR UNIVERSE and you could take the spotlight in an upcoming program! You can also send any other questions, topic ideas or feedback to subspacetransmissionspod@gmail.com!

Join us next week as we tackle the TNG two-parter "Birthright!"
Posted by Subspace Transmissions at 5:30 PM