EPISODE 46 - "REBOOTING TNG AND BEYOND!" 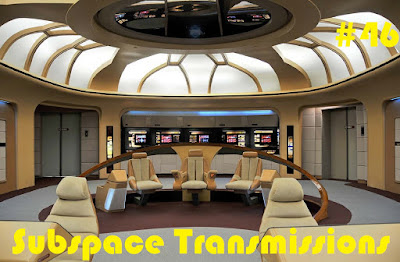 Rebooting the original series worked out pretty well, but what's next? This week hosts Cam Smith, Tyler Orton and Benjamin Yong have a candid discussion about the potential for resurrecting one of the other great Trek series. While the majority of the conversation centers, obviously, on The Next Generation, each of the subsequent incarnations are mulled over, and theories given as to the most probable forms these re-dos could take and when they'll most likely transpire. Come for the fun speculation, but stay for our patented irreverent silliness and frenzied fanboy brainstorming! Enjoy!

Read more »
Posted by Subspace Transmissions at 5:43 PM No comments: 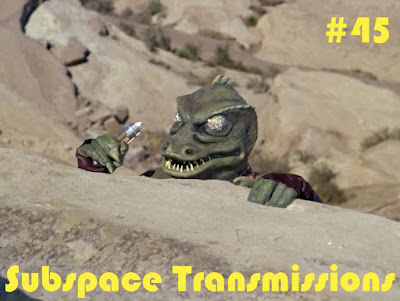 Thanks to its episodic format, Star Trek has offered up a veritable smorgasbord of unforgettable single episode guest characters over its lengthy run. But who, among the countless, rank the highest? This week hosts Cam Smith and Tyler Orton dig through the hundreds of contenders to call out their favorite one-and-done greats. Want a taste of who made their lists? How about a few high profile Romulans, a certain scaly arena denizen and a New Jersey jackass con-man? If you want to hear specifics, as well as some fun surprises and bizarre tangents, you'll have to download away! Enjoy!

Read more »
Posted by Subspace Transmissions at 7:35 PM No comments:

EPISODE 44 - "THE CURRENT STATE OF TREK" 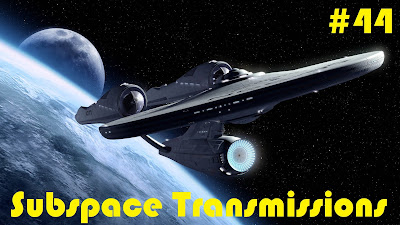 Looking forward, we have Star Trek Beyond and all of the festivities surrounding the fiftieth anniversary on the horizon! But is the franchise really in a good place? This week, in a candid dialogue, hosts Cam Smith and Tyler Orton check in with our beloved property and question how adequately the current status quo is paving the way for a bright future. Over the course of the discussion, the duo debate the difficulties and requirements of bringing Trek back to television, as well as weigh in on how the convention circuit will evolve and how the lack of HD Deep Space Nine and Voyager impacts their potential for gaining new fans. There's plenty of food for thought here, so join us and dig in!

Read more »
Posted by Subspace Transmissions at 6:05 PM No comments:

After five miserable years lying dormant, the Trek franchise was jolted back into pop culture relevancy with the launch of J.J. Abram's flashy and stylish reboot in May of 2009. The highest grossing series installment at the time of its release (not taking inflation into account), the picture brought many new fans into the fold and instantly made the property's future seem oh so bright. The question is, then, does it still hold up six years later? Hosts Cam Smith and Tyler Orton, along with guests Julia Dilworth and Jamie Davies, are on hand to find out, as they examine the popular entry from both a fan's perspective as well as a non-fan's. Does the flick still work as popcorn entertainment? Was Abrams the right man for the job? How efficiently does it re-establish the characters and world we love so dear? Find out on this very special podcast deep dive into the controversial lens flare-happy box-office hit.

Read more »
Posted by Subspace Transmissions at 2:12 AM No comments: