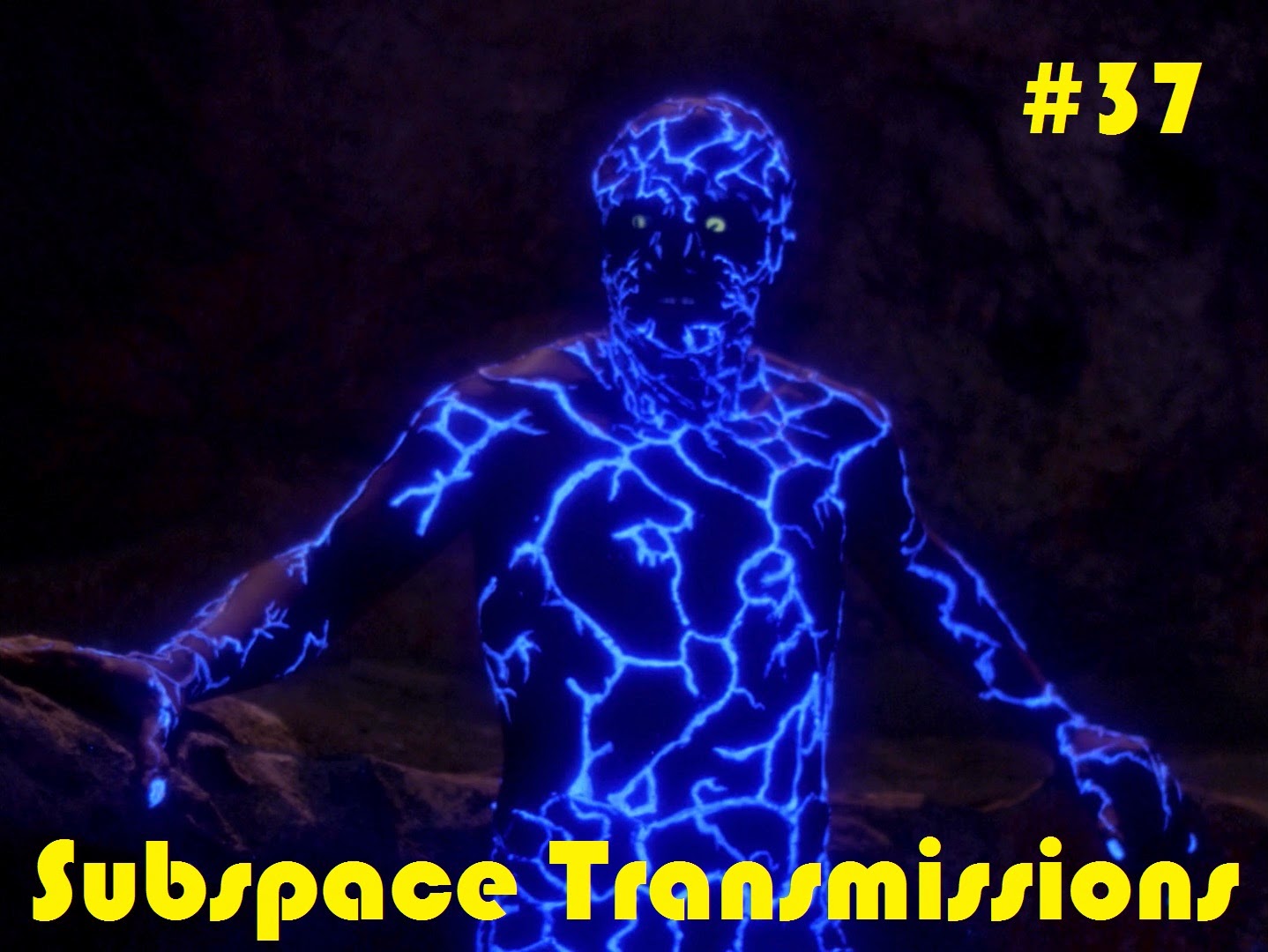 Out of all of the many astonishing phenomena in deep space, none seem quite as recurrent on Star Trek as metamorphosis. In this week's mega-morphin' episode hosts Cam Smith and Tyler Orton take a gander at some of the franchise's most amazing instances of characters undergoing terrifying, comedic or strategic body modifications. Whether it's Geordi La Forge being turned against his will into a mute day-glo alien, Riker devolving into a caveman or Kirk covertly strapping on a pair of Romulan ears, we make it our bold, brave mission to place all of the best transformative moments under the microscope! Hope you enjoy our findings!

Read more »
Posted by Subspace Transmissions at 10:36 PM No comments: 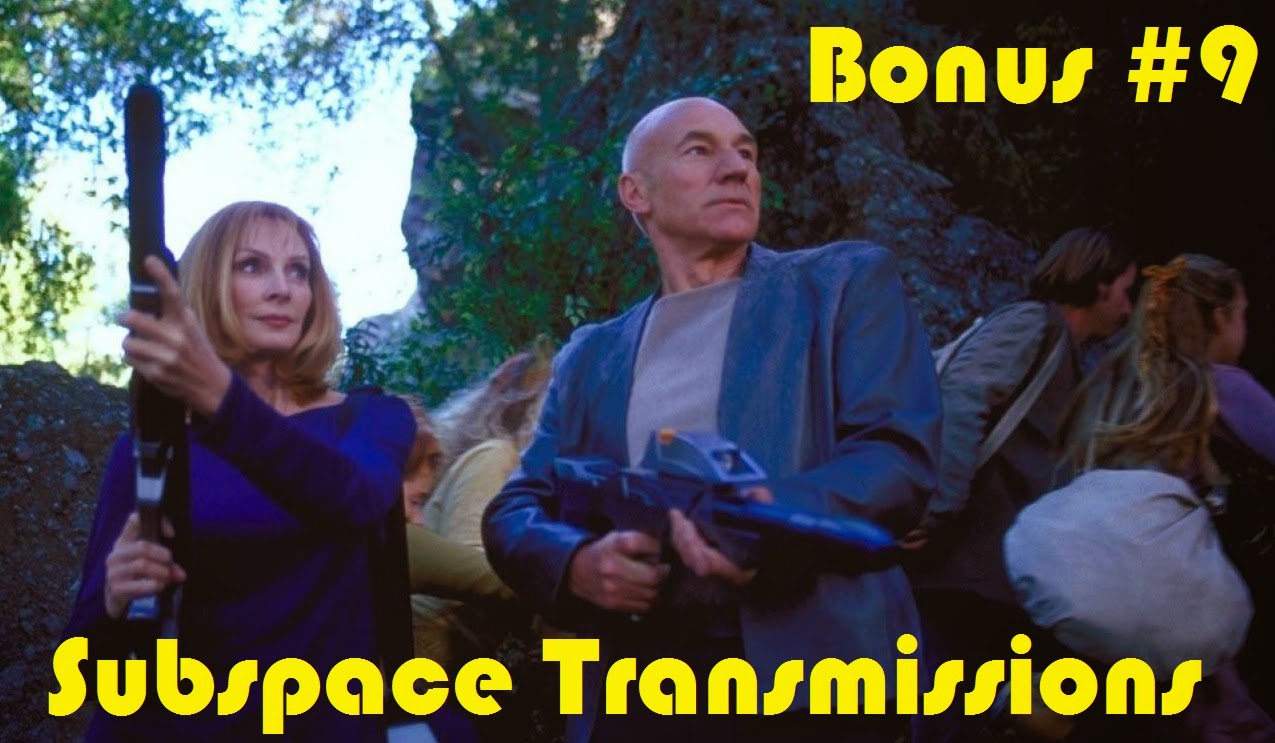 After the huge critical and commercial success of 1996's First Contact, it was only logical that the TNG crew's next cinematic away mission would be twice as good, right?! In this latest Film Flashback bonus episode, hosts Cam Smith and Tyler Orton, along with special guest Tom Ball, return to the Ba'ku homeworld in an attempt to determine how Insurrection holds up almost twenty years later. Is it as cringe-inducingly bad as many fans frequently claim, or are there nuggets of a good movie visible on screen? From mamboing Picard, to weird cave collapses and F. Murray Abraham's high-pitched squeal, we hit all the highlights and lowlights on a grand journey of understanding and discovery. So saddle up, lock and load, and, uh, enjoy!

Read more »
Posted by Subspace Transmissions at 5:35 PM No comments: 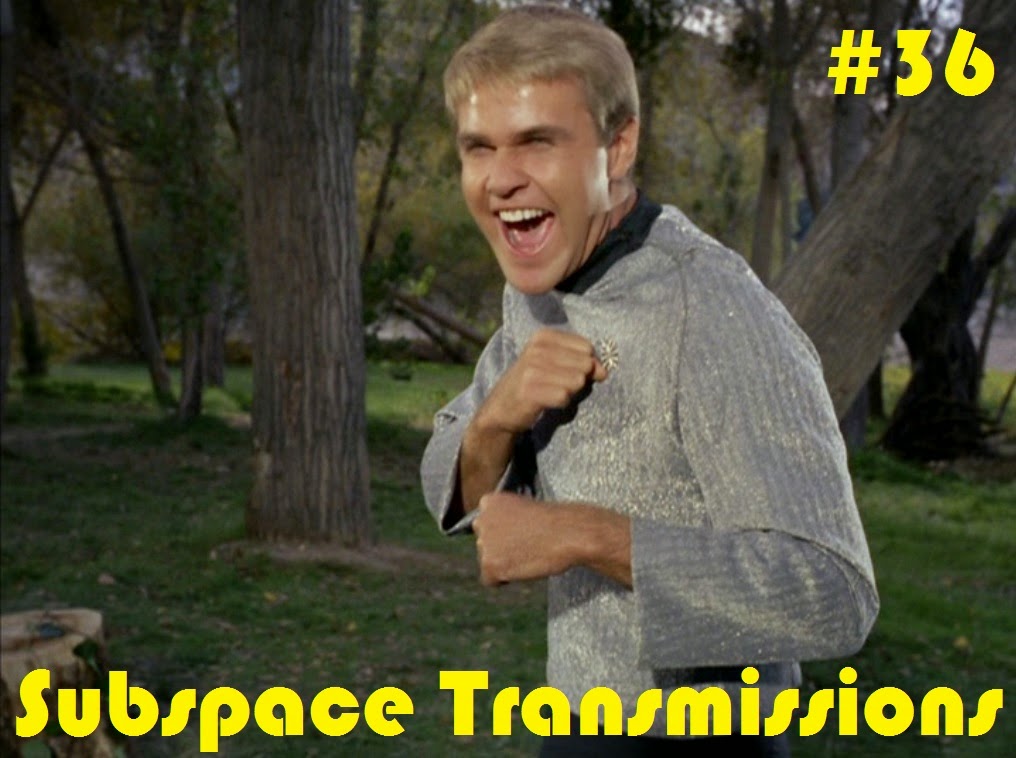 Star Trek has long fought the good fight for multiculturalism on television, but it's also always had a weird stance on those with Irish blood pumping through their veins. In this special St. Patrick's Day-themed episode, hosts Cam Smith and Tyler Orton, along with special guest Carmin Carotenuto, dig deep into this bizarre phenomenon in search of nebulous answers. From Kirk's deranged Starfleet Academy tormentor Finnegan to the folksy denizens of Fair Haven, we hit all the cartoonish bases, as well as honor the franchise's most respectful and beloved Irish series regular. Forget the green beer and cheap plastic hats, this episode alone offers more than enough merriment to make for a fitting March 17th celebration!

Read more »
Posted by Subspace Transmissions at 1:58 PM No comments:

EPISODE 35 - "THE WEIRDEST & WILDEST TREK SPIN-OFFS THAT NEVER WERE" 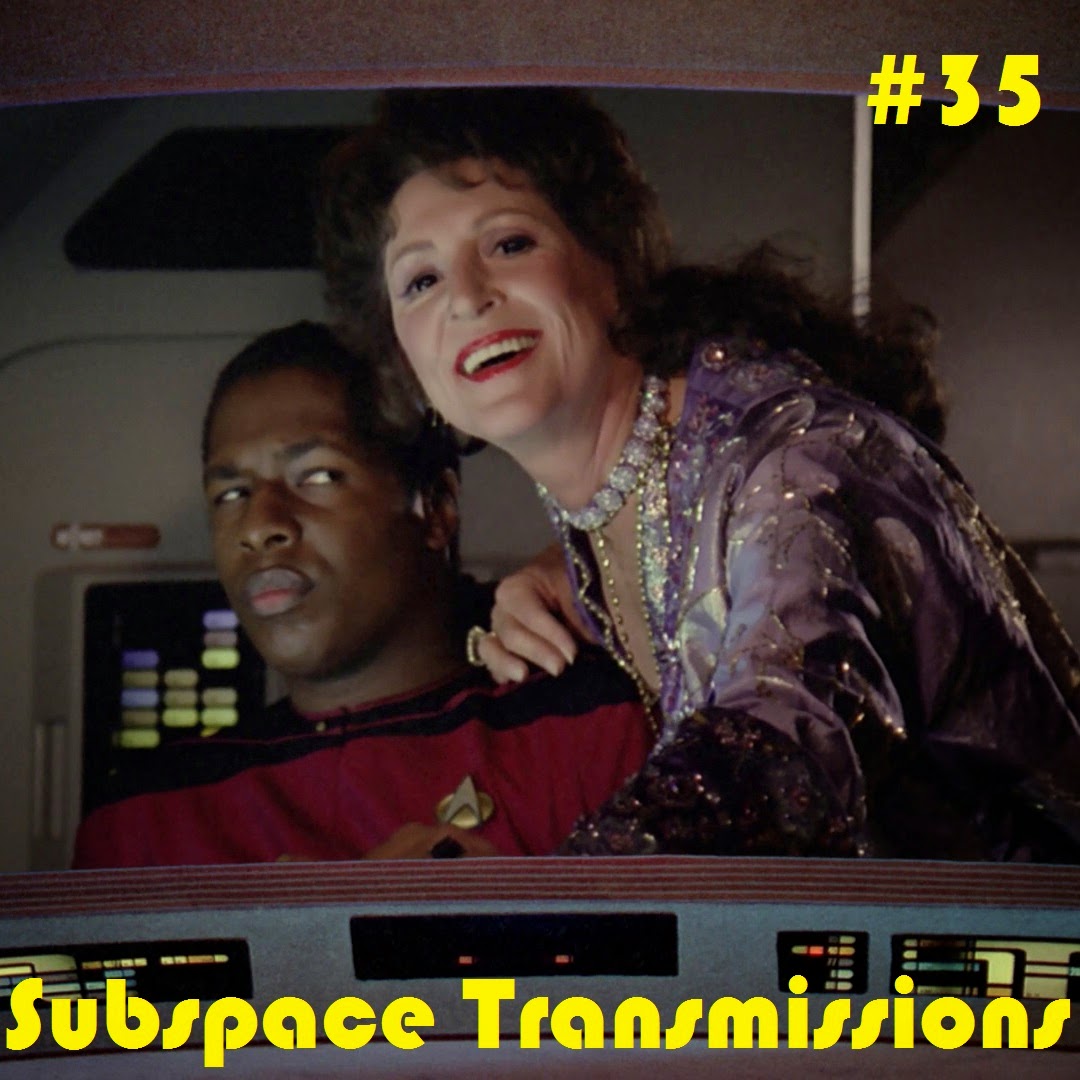 As polarizing as series like Enterprise, Voyager and Deep Space 9 can be with fans, it's fair to say that overall Star Trek has a pretty proud and successful legacy worth celebrating. But you don't stumble onto great show and movie ideas without briefly entertaining some truly terrible ones. This week hosts Cam Smith and Tyler Orton, along with special guest Tony Geluch, dig into What Culture's fantastic recent list of the franchise's most bizarre and outlandish scrapped spin-off concepts. From the ongoing adventures of Gary Seven to Riker-rific Star Trek: Titan, we weigh in with our own thoughts and debate whether these abandoned efforts ever could have worked, and what elements - if any - were worth salvaging.

Read more »
Posted by Subspace Transmissions at 2:30 PM No comments:

EPISODE 34 - "A FAREWELL TO LEONARD NIMOY" 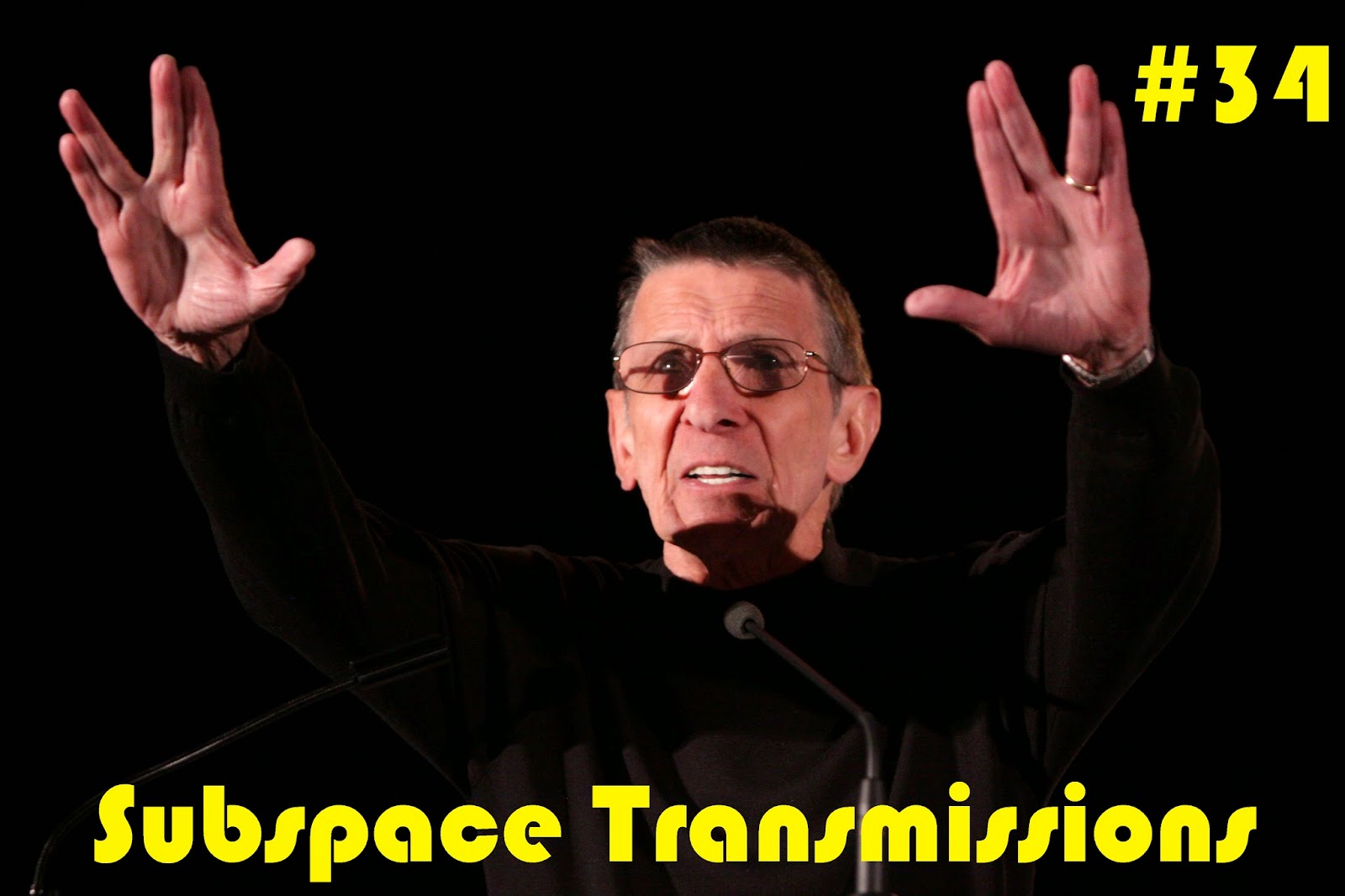 One of Trek's very brightest stars sadly dimmed last week with the passing of Mr. Leonard Nimoy, the unforgettable talent who brought magical life to our much beloved Vulcan science officer Spock. In this special episode hosts Cam Smith and Tyler Orton attempt to unpack their own very messy human emotions about this momentous loss, and pay tribute to the man, his work and the rich enduring legacy he left behind.

Read more »
Posted by Subspace Transmissions at 12:37 AM No comments: