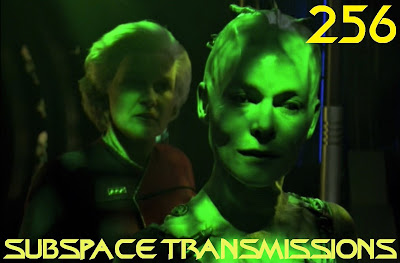 Hosts Cam Smith and Tyler Orton, along with special guest Scott Hardy, pop back from an alternate future in order to delve into Voyager's splashy final episode, Endgame. How does this finale hold up when measured against some of the franchise's other legendary series conclusions? Is it a satisfying close to the crew's often bleak seven year journey? And are we content with where we leave our beloved characters?

Or, you can beam on over to iTunes or Stitcher Radio to subscribe to the show! Leave a review while you're there!

Join us next week as we explore Trek's history with androids!
Posted by Subspace Transmissions at 12:00 PM