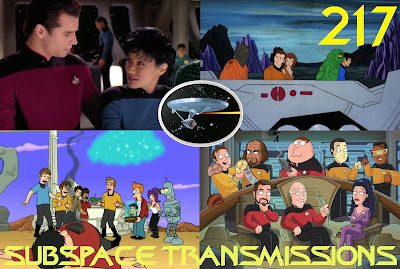 Now that Star Trek: Lower Decks is in the process of becoming a reality it's time to consider the doors animation opens for the franchise going forward, and the lessons learned from the attempts of yesteryear. This week hosts Cam Smith and Tyler Orton awkwardly exchange blank expressions while digging into the considerable potential of Trek's latest announced incarnation. What aliens would be cool to see? How could this comedic new venture play with canon? In addition, the duo take a look back at Star Trek: The Animated Series and highlight what worked, what didn't and which elements of the show would be worth bringing to Lower Decks.

Join us next week as we tackle the second Short Trek episode, Calypso!
Posted by Subspace Transmissions at 8:57 PM