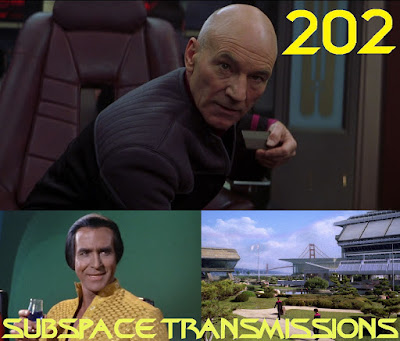 Read more »
Posted by Subspace Transmissions at 1:11 AM No comments: 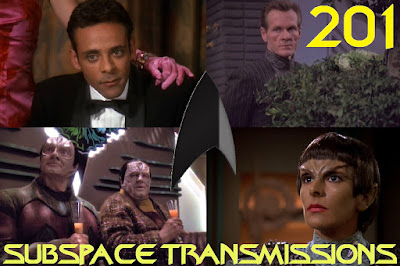 Ever since Discovery teased looming possibilities for the franchise's favorite controversial covert spy agency Section 31, debate has begun anew regarding whether or not this element of canon suits the Roddenberry philosophy. As cool as these stories can be, do they belong in a utopia? This week hosts Cam Smith and Tyler Orton dust off their best fedoras and trenchcoats in order to delve into Trek's surprisingly long history of cloak and dagger tactics. From the Romulan-headed Tal Shiar, to Cardassia's Obsidian Order all the way down to 31, the duo do their darndest to track the evolution of these often twisty tales and consider the potential pitfalls future series may want to watch out for before shining up their black badges.

Read more »
Posted by Subspace Transmissions at 5:22 PM No comments: 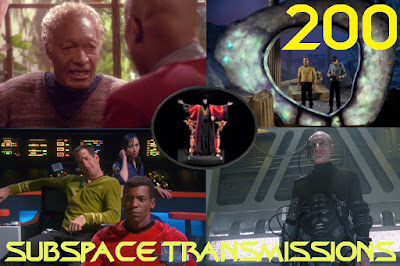 When you're celebrating a podcast anniversary you have to go big! And what better (and more suitably controversial) way to mark a momentous 200th episode than with the hottest topic in all of Trekdom? This week hosts Cam Smith and Tyler Orton don party hats and toss confetti while counting down their picks of the ten greatest stories in the history of the franchise. From Kirk and Spock's tragic trip through the Guardian of Forever, to the creepy debut of Locutus and Jake Sisko's tear-inducing alternate future, the duo sing the praises of the unforgettable sci-fi hours that made Roddenberry's universe as popular and powerful as it is. Plus, as an added milestone-worthy bonus, the two fondly recall their favorite Subspace Transmissions installments from the past couple years.

Read more »
Posted by Subspace Transmissions at 4:31 PM No comments: 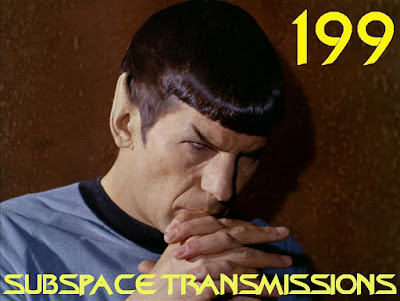 Ever since being introduced in TOS's iconic second season premiere Amok Time, the mating ritual of pon farr has become both a key component of Vulcan mythology as well as an ultra-popular source of humor among fans. But does the franchise's approach to this oft-referenced biological event need to change with the times? This week hosts Cam Smith and Tyler Orton throw their soup against the wall as they examine several key episodes involving the dreaded seven-year spell and break down what works and what doesn't for current-day audiences. From Spock's legendary duel for T'Pring's hand, to B'Elanna Torres's highly problematic blood fever experience, the duo debate how future storytellers might best navigate this tricky go-to Star Trek trope.

Read more »
Posted by Subspace Transmissions at 1:35 AM No comments: