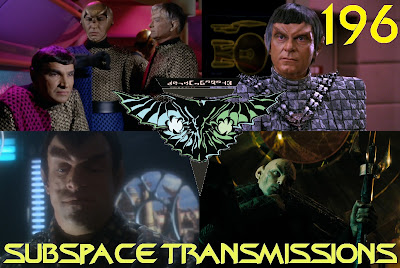 Sure, the Klingons are Trek's numero uno alien antagonists as far as pop-culture is concerned. But what about the Romulans, who were originally envisioned as being TOS's primary big bads? This week hosts Cam Smith and Tyler Orton embrace ambiguity and stealthy, multi-layered tactics while charting the history of one of the franchise's most endlessly fascinating and sophisticated creations. From their unforgettable introduction in Balance of Terror, and many prominent TNG showcases, all the way down to J.J. Abrams' 2009 reboot, the residents of Romulus and Remus have seen considerable evolution and mythology expansion. So join the duo as they attempt to pin down the Federation's most notoriously slippery adversaries and imagine where Discovery and future incarnations may take them.

Join us next week as we ponder popular characters' major visual makeovers.
Posted by Subspace Transmissions at 5:31 PM