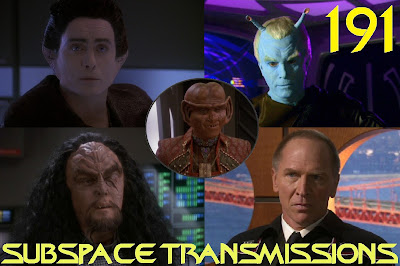 Since the franchise's earliest days there's been a proud tradition of recycling character actors under heavy alien makeup. And while many proud individuals have inhabited multiple personas, nobody's done it better than Mr. Jeffrey Combs. This week hosts Cam Smith and Tyler Orton undergo several costume changes while taking a look at the actor's many unforgettable creations, from modest early beginnings as a pervy creep in the DS9 episode Meridian, to fan-fave icons Weyoun and Shran. In addition, the duo also celebrate the contributions of Combs' fellow 'Men & Women of a thousand Trek faces' including J.G. Hertzler, Vaughn Armstrong, Tony Todd and Susanna Thompson, and determine which species they should portray on Discovery and beyond.

Join us next week as we explore the franchise's obsession with prequels!
Posted by Subspace Transmissions at 9:40 PM