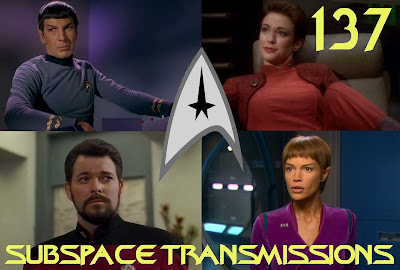 Since we officially settled the endless Best Captain conundrum last summer, it's now time to continue down the Starfleet line! This week hosts Cam Smith and Tyler Orton, along with special guest Carmin Carotenuto, don their honorary second banana hats as they each strive to justify their own ranking orders for the franchise's invaluable first officers. Is there an argument against Spock? And how does Zachary Quinto's take stand up against Nimoy's legendary icon? And what about all-time badasses Major Kira and William T. Riker? There's plenty of food for thought in this jam-packed episode, with just a little dash of chair envy.

Wanna appear on the show? Shoot us a 30 to 60-second audio clip telling us how you would RANK STAR TREK'S FIRST OFFICERS and you could take the spotlight in an upcoming program! You can also send any other questions, topic ideas or feedback to subspacetransmissionspod@gmail.com!


Join us next week as we revisit the classic Klingon-centric DS9 episode The Way of the Warrior!
Posted by Subspace Transmissions at 5:40 PM