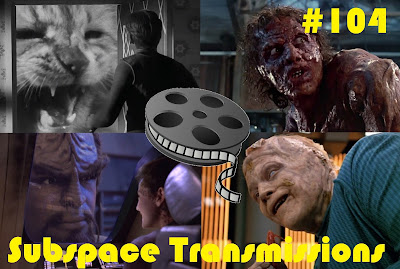 Star Trek has famously drawn boundless inspiration from esteemed literary figures such as Melville, Dickens and Shakespeare. But what about the cinematic world? This week hosts Cam Smith and Tyler Orton recreate their Las Vegas Con panel at home with an in-depth discussion on the franchise's rich history of paying homage to film giants like John Ford, Richard Fleischer, Steven Spielberg and John Frankenheimer. From westerns, war films, noir and sci-fi to slam-bang 80s blockbusters and beyond, the duo showcase iconic episodes and the clever and memorable silver screen efforts that fuelled the show's creative energies.

Wanna appear on the show? Shoot us a 30 to 60-second audio clip offering your insights on HOW FILM INFLUENCED STAR TREK and you could take the spotlight in an upcoming program! You can also send any other questions, topic ideas or feedback to subspacetransmissionspod@gmail.com!

Join us next week as we unveil the first annual Subspace Bloodwine Games!!!
Posted by Subspace Transmissions at 9:22 PM