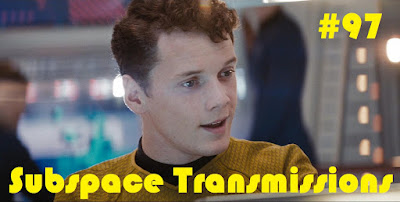 Due to several recent bombshell Trek-related happenings your originally scheduled programming has been delayed in favor of a Subspace news update! This week hosts Cam Smith and Tyler Orton react to the tragic passing of Anton Yelchin, and discuss his filmography and boundless talent, as well as review Beyond's Rihanna-tastic second trailer and argue the film's box-office prospects in this legendarily tough summer movie season. Lastly, the duo break down all of the recent developments regarding Bryan Fuller's upcoming 2017 CBS series.

Wanna appear on the show? Shoot us a 30 to 60-second audio clip offering your thoughts on ANTON YELCHIN, OR STAR TREK BEYOND & 2017 and you could take the spotlight in an upcoming program! You can also send any other questions, topic ideas or feedback to subspacetransmissionspod@gmail.com!

Join us next week for a thorough analysis of the final traditional TNG two-parter "Gambit!" (For real this time, we swear.)
Posted by Subspace Transmissions at 1:10 AM