It may be an old cliché to say first impressions are everything, but Star Trek Beyond lost a lot of points with its polarizing Beastie Boys-rific teaser trailer. This week hosts Cam Smith and Tyler Orton, along with a handful of special guests, discuss the recently dropped face-saving (?) full length trailer, as well as the new CBS teaser for Bryan Fuller's 2017 alleged anthology series. Do these two new clips boost confidence in their respective projects, or are they just disheartening? In addition, the hosts debate the box-office prospects for the Justin Lin-directed summer blockbuster and ponder the new TV incarnation's Mirror Universe possibilities.

Special bonus: Trailer commentary by the two hosts!:
And here is Stefan's helpful diagram comparing the Enterprise-A's paneling with the new CBS logo: 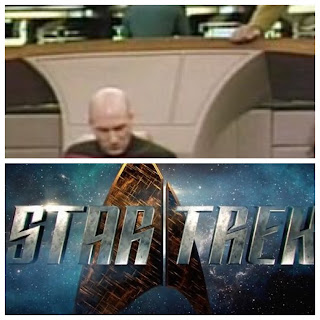 Beam on over to iTunes to subscribe to the show! Leave a review while you're there!


Wanna appear on the show? Shoot us a 30 to 60-second audio clip telling us your thoughts on the STAR TREK BEYOND & 2017 CBS TRAILERS and you could take the spotlight in an upcoming program! You can also send any other questions, topic ideas or feedback to subspacetransmissionspod@gmail.com!

Join us next week as we tackle the Borgtastic TNG two-parter "Descent!"
Posted by Subspace Transmissions at 1:53 AM