It may be an old cliché to say first impressions are everything, but Star Trek Beyond lost a lot of points with its polarizing Beastie Boys-rific teaser trailer. This week hosts Cam Smith and Tyler Orton, along with a handful of special guests, discuss the recently dropped face-saving (?) full length trailer, as well as the new CBS teaser for Bryan Fuller's 2017 alleged anthology series. Do these two new clips boost confidence in their respective projects, or are they just disheartening? In addition, the hosts debate the box-office prospects for the Justin Lin-directed summer blockbuster and ponder the new TV incarnation's Mirror Universe possibilities.

Read more »
Posted by Subspace Transmissions at 1:53 AM No comments: 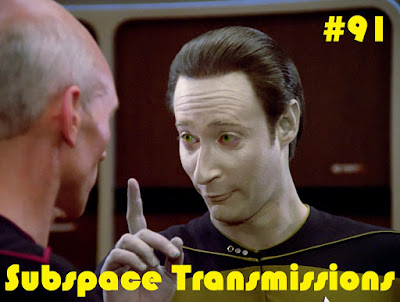 Read more »
Posted by Subspace Transmissions at 4:13 PM No comments: 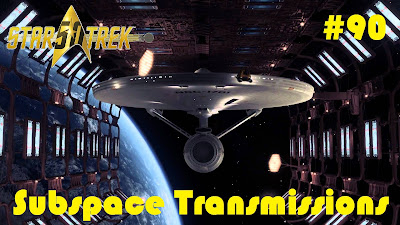 So much of the excitement for Trek's 50th anniversary is centered on celebrating all that has brought us to this point. But how are things looking going forward? This week hosts Cam Smith and Tyler Orton, along with returning guest Andy Chan, hold their annual forum to candidly discuss the franchise's current status quo. How does the Fuller-produced 2017 series appear to be shaping up? Will Star Trek Beyond be able to overcome its bizarre total lack of buzz and be the hit film we hope it will be? And, with lawsuits toppling major efforts like Axanar, what is the future for fan film makers? Just like last year there's no shortage of food for thought, so join us in digging right in!

Read more »
Posted by Subspace Transmissions at 4:26 PM No comments:

#89 - PITCH YOUR OWN STAR TREK ANTHOLOGY! 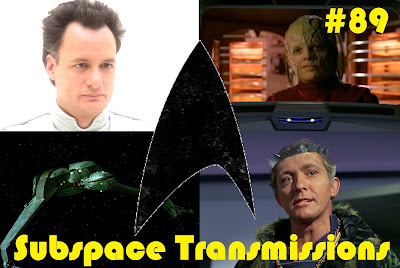 With emerging rumors stating Bryan Fuller's impending Trek venture will be an anthology series, with season one set between Undiscovered Country and TNG, fans have started to wonder what other previously underexplored tales may one day be fleshed out. This week hosts Cam Smith and Tyler Orton, along with special guest Andy Chan, put on their fanboy hats and pitch their own potential stand-alone story arcs. From Q Continuum origins to further Klingon and Delta Quadrant alien drama, the trio's selections run the gamut from thrillingly possible to nerd-tastic day-dreaming. Enjoy!

Read more »
Posted by Subspace Transmissions at 2:46 PM No comments: