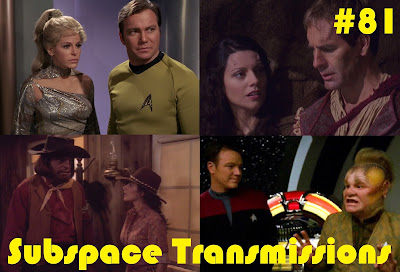 With Star Trek officially in the capable hands of showrunner Bryan Fuller, now it's time to begin pondering what this new show both could and shouldn't be! Dusting off their speculative hats once again, this week sees hosts Cam Smith and Tyler Orton running down their own personal checklists of clichés and tropes that need to be retired as we move into the next thrilling franchise iteration. Do we genuinely yearn for more holodeck episodes? Or another series fraught with story reset buttons? How about more aliens with minor forehead prosthetics? So listen in as the duo do their darndest to dream of a future free of Trek's less endearing go-to staples.

Wanna appear on the show? Shoot us a 30 to 60-second audio clip telling us WHAT YOU DON'T WANT TO SEE IN STAR TREK 2017 and you could take the spotlight in an upcoming program! You can also send any other questions, topic ideas or feedback to subspacetransmissionspod@gmail.com!