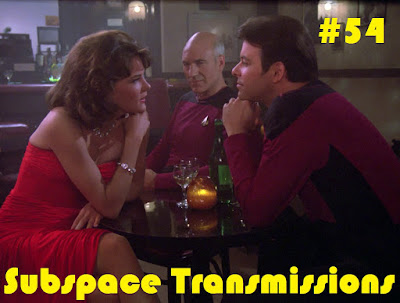 While the holodeck doubtlessly has no shortage of critical and invaluable uses, it's hard to ignore the number of times the franchise's creative teams have highlighted its more, um, saucy potential. This week hosts Cam Smith and Tyler Orton attempt to wrap their heads around several of Trek's most infamous examples of holographic lovin', and debate the ramifications and moral quandaries raised by these scenarios. So join us as we examine the finer points of Riker's seductive trombone party with Minuet, Harry Kim's bovine romance and Barclay's infatuation with a certain Goddess of Empathy, among several other classic moments. Oh my!

Wanna appear on the show? Shoot us a 30 to 60-second audio clip telling us your favorite HOLODECK HOOKUPS and you could take the spotlight in an upcoming program! You can also send any other questions, topic ideas or feedback to subspacetransmissionspod@gmail.com!