EPISODE 43 - "PERILS OF THE TRANSPORTER" 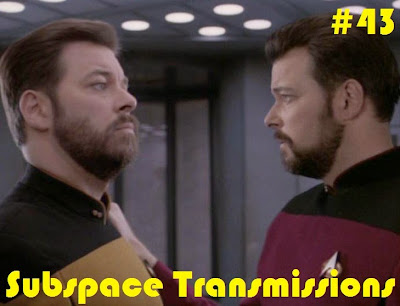 The transporter may be the fastest and easiest way to travel, but man alive does it ever go bananas sometimes. Beaming in with a full damage report, hosts Cam Smith and Tyler Orton contemplate the most horrific accidents that have ever occurred during one of Trek's famous ill-fated quick trip operations. Tackling fan fave moments involving Riker replicas, arm-chomping microbes and beyond, the duo also strive to pin down exactly what happens when your molecules are broken down and reassembled, and debate the moral decisions involved in solving some of these particularly sticky situations. There's plenty of food for thought here, so don't miss out on yet another energizing listen!

Read more »
Posted by Subspace Transmissions at 7:05 PM No comments: 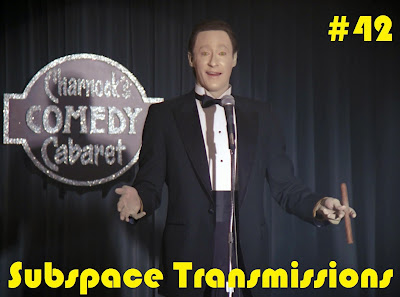 Read more »
Posted by Subspace Transmissions at 8:14 PM No comments: 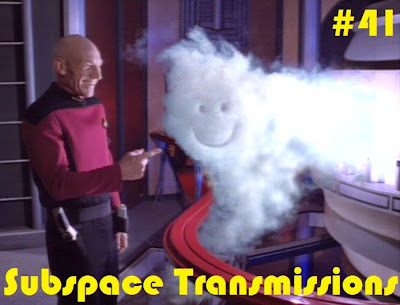 According to one of cinema's greatest icons, "we all go a little mad sometimes..." Well, on Star Trek "sometimes" sure does seem to roll around at regular intervals! Thus, in this week's ultra-loco installment, hosts Cam Smith and Tyler Orton bust out of their Starfleet issue straight-jackets and indulge in the franchise's most memorable moments of deep space insanity. Over the course of the hour-long asylum therapy session we discuss patients such as smiley-face drawing Jean-Luc Picard, hallucinating Dukat, a particularly bonkers Betazoid and those pon farr-ing Vulcan notables Spock and T'Pol. So hop on this galaxy-hopping podcast crazy train because madness this fun can only be infectious!

Read more »
Posted by Subspace Transmissions at 10:52 PM No comments: 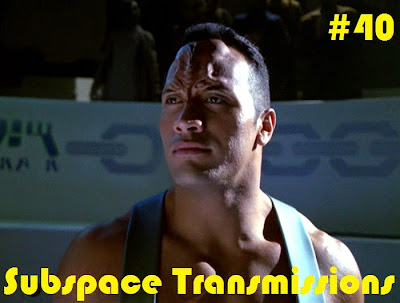 During its five decades Trek has been a welcome home for both high wattage celebrity guests as well as the up-and-coming Tinseltown treasures of tomorrow.  This week, hosts Cam Smith and Tyler Orton bask in the golden glory of the franchise's most legendary casting coups, and debate the individual merits of the episodes boosted by their presence. Among the many, many shout-outs included in this packed name-dropping podcast hour, we shine the spotlight on a certain eye-brow lifting Pendari Champion, a rock and roll icon making a fishy stealth appearance and a poker-playing holographic Nobel prize-winning physicist. The stars are definitely out in full force, so join us as we decide which ones burn brightest, and which ones just plain old flame out.

Wanna appear on the show? Shoot us a 30 to 60-second audio clip letting us know who your favorite STARS ON TREK are and you could take the spotlight in an upcoming program! You can also send any other questions, topic ideas or feedback to subspacetransmissionspod@gmail.com!

Posted by Subspace Transmissions at 3:29 PM No comments: